skip to main | skip to sidebar

The Stone Barn; a Reminiscence

"Music from Big Pink" was an inauspicious LP, selling only moderately to some Dylan fans who hadn't deserted him after Newport. The group of musicians that made the LP didn't have a name. They were simply referred to in some vilifying reviews as "the band that accompanied Dylan". Pete Seeger had been appalled by them, but "Big Pink" was a landmark record for many of us. It was followed soon after by an even better record humbly titled "The Band". By that time they'd earned no less, nor more, of a name.
The Band influenced me and some friends to start our own group and rent a house like Big Pink where we could woodshed. It just seemed like the thing to do even though we had little money to keep up the lease. The old Heyburn farm became our home for 18 months. The property was located near Chads Ford, PA a couple of miles from where Andy Wyeth painted. It was a big place-- six bedrooms, plus an attic, two living rooms, a mudroom, kitchen and upper level porch. I used to sit on that porch sometimes when the moon was full and write or sing until dawn. The fields and woods behind the house sang back to me with ciccadas, owls and other wildlife.

We called our band Wire and Wood (the name has since been re-used by another east coast outfit unrelated to us). It was a phrase from a lyric written by our fearless leader, a songwriter named F. C. Collins who was nicknamed Fritter by his grandfather. The name was the perfect sobriquet for sizing you up. He'd look you in the eye with an unspoken threat that defied you to call him an apple turnover. No one ever did. He had the look of the wolf in those gray blue eyes and the stocky build of Grizzly Adams.

The melodies of Mercury splash along the walls
Sounds of wire and wood, fingers moving good
("Mercury" copyright by F. C. Collins) 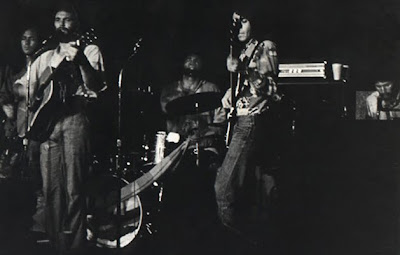 The melodies did indeed splash along the walls mixed liberally with other substances. Day and night music was heard in the Heyburn house after we took it over. We collaborated on original tunes in combinations; me and Fritter, Rick and Fritter, all three of us. The songs were juicy, with titles like "Bearcat Woman", "Painted Pony", "Changing of the Guard" and "Long Distance Man".

Friends dropped by at all hours to listen to the arrangements we were tightening up in one of the living rooms. During a lazy afternoon two guitarists might be found in the kitchen working out Allman Brothers style harmony lead guitar parts. Some evenings there'd be a three-part harmony vocal rehearsal happening in one room over a jug of wine, while in another room the rhythm section worked out a tricky groove that made a song pulsate like a titan's heartbeat. Taped to the walls were set lists, gig posters, stage layouts, clippings of our Main Point reviews- anything that kept us focused on what we were doing. We meant business, but I remember it as the most fun I've ever had with music.

Fritter and I used to hang out and write in the barn sometimes. It was a typical farm structure for eastern Pennsylvania, probably built by Quakers who loved to use stone in everything. For the Quakers and the Egyptians, if it was worth building at all it was worth building for posterity. This particular barn was huge- four levels spanning almost full acre. It smelled of manure, barley and damp hardwood. The wooden top levels had rear bay doors for tossing out bails to the stables in back. Fritter and I would sit up there of a summer afternoon- bay doors swung wide, our legs dangling high above the pasture- and write. We put the tunes together mostly from fragments of lyrics and melody we'd composed seperately. We were learning as we went, discovering our creative wings while the barn held us majestically aloft and the hawks circled above us.

It came to an end too soon as all good things do, and I was brought back to earth older and somewhat wiser. But I've managed to keep a few inches of sky between me and the ground by holding onto the idealism we shared and the standards we set with our feet in the air that summer. Those values became essential when I ventured to Nashville some years later. I've never forgotten that music is all about woodshedding and dreams. The beginning is the most difficult part of anything, whether it be a life, a journey, a career or a song. Our beginnings define us. Anything well-begun is more often than not well-completed.

After decades in the south I returned north recently to reconnect with my past. I live only a couple of miles away from the Heyburn property now, which was re-zoned in my absence. Commercial potential never lies unexploited for long in America.

Developers attacked the barn last month. Notified of the event by a neighbor, I went over to watch as the shirtless young men, tanned and glistening, ripped the boards off the roof one by one and threw them towards the sinking sun. The Band's "Whispering Pines" floated through my head as the soundtrack for the scene.

By the end of the day the upper wooden structure was completely gone, bay doors and all. But in the cool shadows below, the massive stone walls remain. That old foundation is still holding up a few of my dreams this morning. After all, part of me has never stopped being a kid with his feet dangling in the blue.

I'd say your book, which was mentioned in a previous comment, is coming along nicely.

One of the great things about autobiographical writing is that it passes the past on to posterity. They may have ripped apart the barn, but now, with your reminiscence, that barn and its significance in your life and in the formation of your songwriting ethic lives on in the minds of all who chance to read this piece.

We corresponded at some length about a year or so ago (and you have written often) about collaboration in song writing and its being commonplace in Nashville. It would seem, perhaps, that your great success at collaboration was a natural evolution from your communal musical experiences in the farmhouse and in the barn.

The early stories are fascinating and informative, and I hope they will continue to take up a significant part of the exploration of songwriting that you have been weaving on your blog.

I agree completely with Tim. Keep it coming! :)

You have way more to say than the hard fought distillation in your songs.

Craig, your personal biographies unfold like a master artist, gracing a painting with strokes of life experienced. Can't wait for your book! p.s. make sure this one is in there!

chromehead
My songs have been recorded by Ray Charles, Johnny Cash, B. B. King, Alison Krauss, Vince Gill, David Wilcox, Poco and others. I currently perform in the NE and I'm a somewhat recalcitrant member of the NSAI, ASCAP, AFM, and AFTRA.

CB on the web